Stornoway Sailing Club is a small, friendly, family-orientated sailing club, which meets for sailing sessions in and around Stornoway Harbour every Tuesday evening and Saturday afternoon between late April / early May and late September / early October each year, depending on the weather.

We welcome people of all ages and all ability levels, from complete beginners to experienced sailors. Although we currently concentrate on dinghy sailing for both juniors and adults, we welcome keelboat owners and would like to expand this aspect of our Club sailing.

When the weather doesn’t allow us out on the water, our highly-experienced team of Club volunteers can provide onshore theory sessions to fill in gaps in knowledge and improve skills.

Stornoway Sailing Club was formed in the 1980s as a result of increasing teenage demand for the sport of sailing, and operated for many years from the Waterman’s Tower in the Lews Castle grounds using a small fleet of Topper dinghies. However, a drop in interest saw the Club fall into dormancy in the late 1990s, and much of the Club’s assets were donated to neighbouring sailing clubs.

In the late 2000s, fresh interest, combined with a change in Club Committee and a new fleet of Topper Topaz and Taz dinghies, shared with local council sailing school CnES Sailing, saw a revival in the Club’s membership, which has continued to build ever since. The Club’s dinghy fleet now includes Laser Picos, 420s and Wayfarers, and the Club is fundraising for some larger boats so we can introduce more kids and adults to the sport we love.

Stornoway Sailing Club currently conducts its sailing sessions from Cuddy Point in Lews Castle Grounds. The Club intends to move its base of operations to Stornoway Port Authority’s Newton Marina slipway once the planned on-shore facilities are completed - watch this space!

I started sailing dinghies on a whim when I was young, and the sport became an obsession! I rapidly progressed to racing all kinds of boats, from dinghies to larger keelboats, and sailed at international level for a time. I’m an RYA Dinghy Senior Instructor, and ran the Comhairle’s sailing school for five years. Having been somewhat shanghaied into the role, I’m glad to have been Commodore/Chairman since the Club was re-formed back in the late 2000s, and to have a role in developing the sport on the Island. I’m also an employee of Stornoway Port Authority, so have a bit of insight into the inner-workings of the Harbour!

I have been sailing on and off since the early 1970's. My introduction to sailing  dinghies began at secondary school, under the supervision of the instructors at Linlithgow Outdoor Centre on Loch Linlithgow during the winter/spring season and then Loch Lomond during the summer holidays, where we assisted the instructors run week-long sailing camps for school kids and outdoor centre members

I progressed to racing dinghies and keelboats (mainly flying fifteens) in regattas on the River Forth and the Clyde, and in the late 1990’s joined Monklands Sailing Club, where I eventually gained my RYA Level 2.

I joined Stornoway Sailing Club soon after moving to the Island, and completed an RYA Assistant Instructors course with CnES Sailing in order to help promote sailing in the area.

Started sailing dinghies whilst at college. Hartlepool Sailing Club. Sailing yachts in Mediterranean. Met partner in sailing club in Burnham on Crouch in Essex. Daughter is now a junior member with her own boat.

I have been messing around in boats since before I could walk, be it pram dinghies,1/2 tonner racing yachts, and many others in between. The magic of silently being pushed along by wind never wanes for me.  Although my background includes the excitement and competitiveness of racing around the cans, I am more likely to be serenely exploring remote places in a sailing boat, large or small.  Home-taught by my father, I remain unqualified but still have a passion to pass on the sailing bug and the fun it brings. 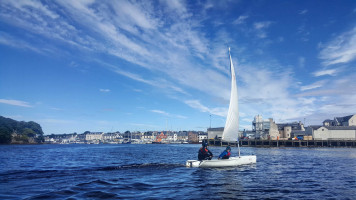